“I see myself by the light of my becoming.”

Egyptian Book of Coming Forth into Day

I’m just back from my twelfth trip to Egypt since 1995. As always the experience was profound and heart opening. I took this picture of the Full Moon as our group was about to enter the Great Pyramid for two hours of private time.

Once this monumental structure was covered with white Tura limestone casing stones and crowned with a golden capstone. Even in historical times we are told it shone like a brilliant beacon in the distance. Today the exterior of the Great Pyramid is a skeleton of its former grandeur, but this last remaining wonder of the ancient world still vibrates with power and has the capacity to transform. 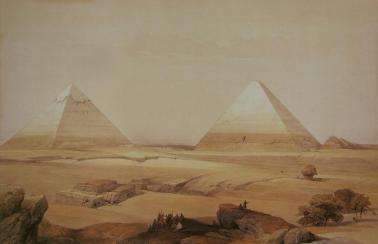 I have been called back to Egypt many times, seeking answers to a lifelong pull this ancient land has tugged on my heart. The visions and memories that haunt me from former lives are in stark contrast to the Egypt of today. I have visions of glorious temples where ritual and ceremony connected with the deepest parts of my soul. I sense that my life had meaning and purpose then and that I have been searching for that kind of fulfillment ever since.

This time my transforming experience was completely unexpected. I’ve seen changes in twenty-three years–more women are working and technology has changed lives. On my early trips all the flight attendants on Egypt Air were men; likewise those who cleaned the rooms in hotels and acted as servers in restaurants were men. That has changed dramatically. This time the person who cleaned our room at the Mena House was a beautiful young Egyptian woman.

It happened that one afternoon I returned to the room and discovered her as she was working. I was transfixed as I realized she had just finished and was looking around the room inspecting her work. Her sense of pride was palpable. She turned, saw me, and her face blossomed with a radiant smile. We connected in that moment in a silent accord as she had the chance to silently share what she had done. I nearly wept. Her satisfaction at a job well done hit me like a bolt of lightening. I felt a kinship with this woman that she had found the freedom to work and a measure of independence. Our connection was silent, but it was a bond between women that is timeless–our struggle to learn who we are and what we are capable of. I won’t forget her or the brilliance of her smile and what that brief link meant to both of us.

I’ll close with a poem written by Bob Ransome, a member of our group, as it captures the spirit of our time in the pyramid.

STARING AT STONE
Staring at Stone
Shaped by unknown hands
brings to mind possibilities
Of what began
in ages past
Creating a story
of lost civilizations
Bathed in the glory
of a universe bigger
than the mind can conceive
are we more than dust
Created to believe
that mysteries exist
So answers can be found?
above, below and within
Eternal, sacred ground

The following is a transcript of an interview conducted by Satiama Radio moderator Julie Loar. Ms. Loar’s questions are in bold. (JULIE LOAR) We are…

Like it or not, and paraphrasing a Chinese saying, we live in interesting times, and no one is more aware of this than today’s children.…

The simple truth is this every person is a visionary with a unique story to tell. Whether that story is your own autobiographical story, whether…

“And the day came when the risk to remain tight in a bud was more painful than the risk it took to blossom.” ~ Anais…